Start Your Year & Career with My Gateway >

Elizabeth’s journey has been an inspiring one. From her early days as an apprentice to now as an emerging leader in her workplace and industry. Over the past four years, Elizabeth has been nominated for and won several awards including My Gateway’s Apprentice of the Year in 2020. She has also matured into a role model for female apprentices in her community.

We caught up with Elizabeth after she finished her Certificate III in Parks and Gardens, to reflect on her journey.

How does it feel to have completed your apprenticeship?

It is a major relief to be able to start my career. It has given me the feeling of a new beginning and a chance to continue with my introduction to horticulture.

What are some of the biggest things or lessons you have learnt over the last four years?

The biggest thing I learnt during the time I spent with Liverpool City Council was to be able to adjust and adapt to every situation. Every day throws up a different problem to solve, even though at times they might seem a little trivial.

Looking back to who you were when you started your apprenticeship to now, how would you say you have changed and grown as a person?

Some comments that have been made recently to me in conversations with fellow workers who I’ve spent the past four years with, is how I now approach new situations with maturity. I feel as though I was still thinking as a child straight from school but now I have started to collect life experiences that I am able to call upon in work and life in general. 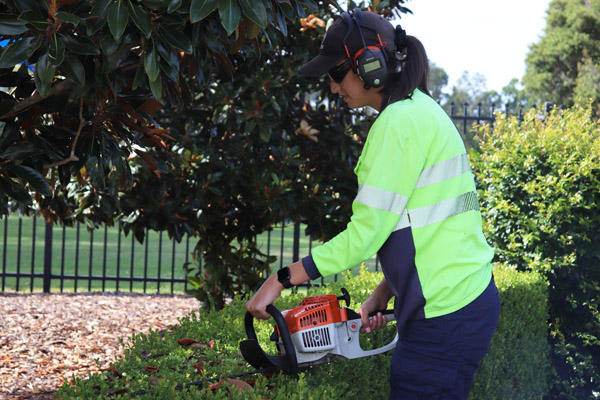 What were some of the highlights/achievements you are most proud of during your apprenticeship?

The biggest highlight was the honour of being nominated for Apprentice of the Year of the year twice, and successfully winning the award in 2021 along with 3rd Year Apprentice of the Year. But also the feeling of completing two qualifications was another achievement. I also feel one of the biggest highlights was meeting a number of friendly people that I have been able to work with. My apprenticeship will always leave me with great memories.

How has the support been from your host business, Liverpool City Council and My Gateway throughout your apprenticeship?

Throughout my apprenticeship I’ve had amazing support from both Liverpool City Council and My Gateway.

I’ve been lucky enough to work with many people across different teams within Council and with that, I have been taught a variety of skills and knowledge. Before starting my apprenticeship I had little experience in the industry and my team members where very helpful, not only teaching me the job but supporting me through TAFE as well.

Along with the support of Council, I’ve also had the support of My Gateway. From helping me find the career I wanted to finishing my apprenticeship and gaining a full time position with Liverpool Council.

Start Your Year & Career with My Gateway